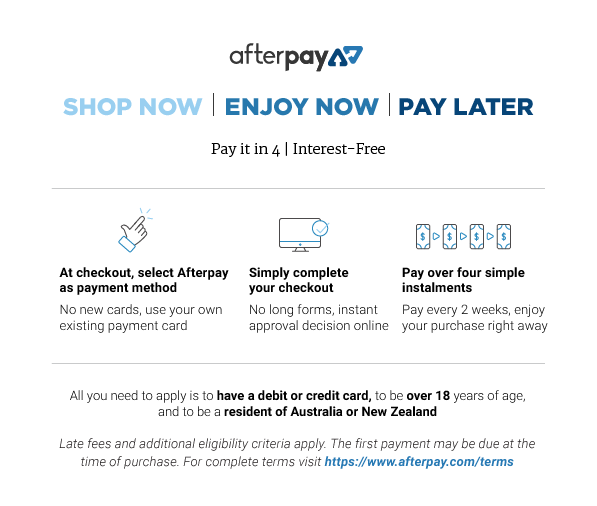 Please note: Afterpay is not available on bookings of over $1,000, and on certain classes.


Whether you’re a beginner just starting out or you’ve tried your hand at other circus skills and wish to add another to your repertoire, juggling classes are one of our quirkiest Sydney workshops and make great team building activities for the office. Unleash your inner clown and check out our Sydney workshops. Juggling classes in Sydney are one of several fun things to do either individually, with a group as team building activities, or as a fun family activity to get everyone out of the house and active. A skill that requires patience, practice and coordination, juggling classes in Sydney are an energetic way to improve your hand-eye coordination and your overall brain health. Switch off your phone, head to your nearest park and pick up juggling tips from world champion jugglers like Kenny Cheung.

We donate with every booking, to 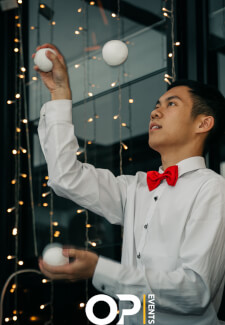 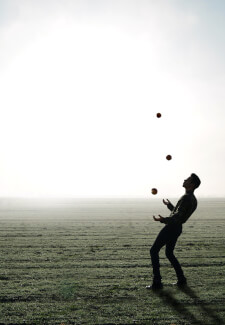 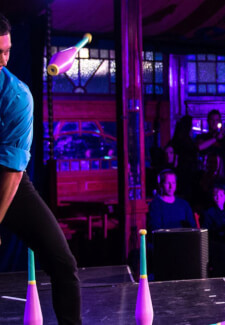 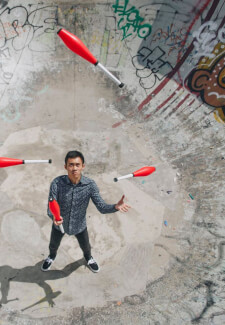 Juggling is one of the oldest circus crafts in history. Often associated with vaudeville-style performance, juggling harks back all the way to ancient Egypt. The actual origins of juggling are unknown, as it’s close to impossible to trace the first time one person threw two balls and caught them. However ancient Egyptian art suggests it was a skill women learnt and was considered to be a very desirable trait. This then spread to the Roman Empire where it was received warmly, and juggling fire torches and knives became the norm for such styles of entertainment.

The popularity of juggling spread throughout the provinces and even after the fall of the Empire, remained exceedingly popular in Europe and Britain. From there it became a circus staple and one famous juggler by the name of Paul Cinquevalli revolutionised the game by juggling three balls whilst simultaneously supporting chair with his teeth! On this chair, sat a man reading the paper on an accompanying desk. This was not all, however, as Cinquevalli was most notorious for his trick of throwing a full glass bottle into the air and then catching it with the end of an umbrella, opening the umbrella as the water rained down on him.

Although ClassBento’s juggling courses may not teach you to support a chair with your mouth or catch glass bottles with umbrellas, you will get to learn the fundamentals on how to juggle 3 balls at a time, with the potential to move onto more complicated juggling tricks. Juggling classes aren’t just fun for circus fanatics and team building events, but learning to juggle is one of the many exciting activities for kids in Sydney that ClassBento can offer. It’s ideal to get the little ones out of the house and giving them somewhere to let out all their school holiday energy.

Our juggling workshops in Sydney offer you a reprieve from the stresses of the week, inadvertently enabling you to clear your mind and focus on the activity at hand. With classes available for large and small bookings, learning how to juggle is perfect for a corporate team building activity that’s off the beaten path, or as children’s birthday party ideas to get the kids moving! Our juggling classes are run by performers who have been specialising in the circus industry for years, and whose experience in both juggling and teaching is second to none in Australia.

Juggling may be old, but the science behind it is relatively new. Up until 1995, no one had looked into the medicinal benefits of juggling, and what they may provide to an individual’s overall health and wellbeing. A study by Oxford University found that the learning of a new skill changes the white matter in the brain (collection of nerve fibres that connect parts of the brain) to open up new neural pathways and expand how much of your brain you’re using.

What makes juggling particularly efficient at this is the way the skill combines concentration, rhythm, balance and fine motor skills that results in achieving a full brain workout. Not only this, but juggling will still increase your heart rate, and doubles as a mild form of cardiovascular exercise. All of these combined can ward off Alzheimer’s disease, help in recovering from addiction, and sharpen concentration.