Your teacher won't see this

You did not pass the Captcha test. Please click the button to try again

Make Your Own Fragrance / Perfume Workshop


Established in April 2010, MakMak Macarons is one of Sydney's leading macaron makers. MakMak's macarons were declared Sydney's best, ahead of heavyweights like Adriano Zumbo and Laduree, in a blind tasting by esteemed Sydney chefs Christine Manfield (Universal), Peter Gilmore (Quay) and Ross Lusted (The Bridge Room). All three voted MakMak as their most preferred.

Carlos, the 'Mak Daddy', of MakMak, can't wait to meet you at one of their next workshops.


I really love eating macaron, so I decided to try and learn how to make them. It was a fun and refreshing class for me - Carlos was such an awesome teacher; he explained the recipe step-by-step so I was able to easily understand instantly. Thanks to Carlos that I ended up making a good batch of macarons and was really glad I joined this class. It was a really good value for money - would love to join another macaron making class next time! 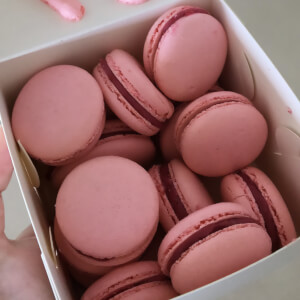 
I thoroughly enjoyed the class and the teacher/owner was very knowledgeable and passionate about his product. Although, the store/working space was a bit cosy with the amount of people that attended on the day. The 2 hour class also felt rushed as there was a lot to get through (who knew macarons were so technical? :P). But importantly, the finished products that we took home were delicious! 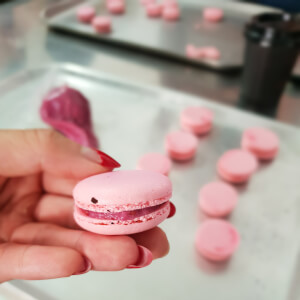 
Carlos Heng was awesome, he knew exactly what he was doing with Macaroons. The recipe and method were easy enough to follow for an average baker (just need practise). I would definitely give it a go again at home. 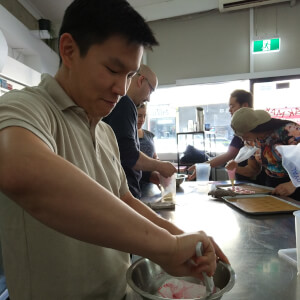 
Great course. Class not too big, and very knowledgeable teacher. Highly recommend. Logical, easy to learn approach with precise recipe that is easily reproducible at home with normal kitchen equipment. Lots of vital tips that recipes just don’t include. Made perfect macarons first time - see photo! Not cheap, and maybe including a Teflon baking sheet would be a nice touch, but I plan to recoup my costs by making lots of macarons for home and friends! 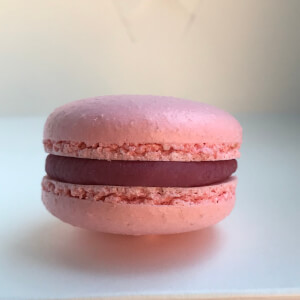 
Carlos was a great instructor, he is very experienced in the area of macaron making, he shared a lot tips on what to avoid and what could go wrong with the macaron making process with his past teaching experience. He was able to answer every single questions from the students with lots of detailed explanations. Very impressive indeed! He is also funny and friendly which made the class very enjoyable. Highly recommended. 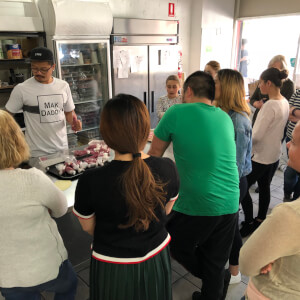 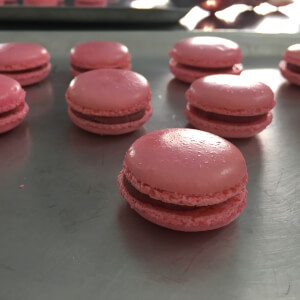 
Well organised workshop Carlos offered expert advice and lots of tips on how to create perfect macarons. Everybody was impressed with their batch, a great class for macaron lovers! 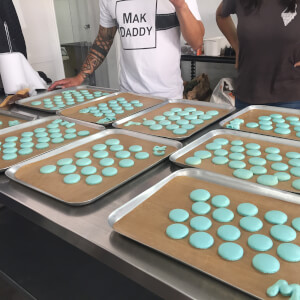 
I like Macaroons and i really wanted to learn how to make them.
so i joined this class and it was absolute fun and entertaining.
Even though it wasnt easy as expected but it was good and easy steps to follow with the teacher!
Thanks to everyone.


Carlos was nice and kept to his material. The venue was ok and they had air conditioning, the materials provided were organized and arranged well. The class was quite expensive and although the macarons were good, no additional attention was given to the kids. The class should note that it is not suitable for children under 10 and to pay $100 per child is very expensive for a bit of a rush 2 hour class. We learnt some little tricks and hope that our macarons are going to turn out. Overall an enjoyable time.


I thoroughly enjoyed the class and was impressed at the wealth of knowledge our teacher had.
I definetly recommend this class!


I attended the Mak Mak workshop with my 14 year old daughter. We both had a lot of fun, and Carlos was an excellent teacher. Very generous sharing his advice and experience. Would definitely recommend.


Over all it was nice to know all the steps and the hard work it take to make a single macaron. But personally I was expecting more I thought that we were going to learn and do every thing ourselves but almost every thing was pre prepared and we ended up just mixing and piping. Also I do not recommend it for kids under 12 years old.


It’s always a pleasure to attend a workshop taught by true professionals. Carlos is obviously a competent chef, with a real passion for making macarons. His class was fun and knowledgeable. We also got to put in good practical skills and the end results was perfect!


A really great class, lots of fun and learnt so much about Macarons.
Carlos was a fabulous teacher very clear instructions and happy to answer questions about the process. Would recommend this class to anyone.

If you need a customised class (e.g. for a larger group, a special event, or more advanced learning, just get in touch with the MakMak Macarons or us, and we'll make it happen.